Premier Retail Networks, Inc. (PRN) and Costco Wholesale Corporation (“Costco”) (NASDAQ: COST), the third largest retailer in the U.S., this week announced a multi-year agreement to extend their longstanding relationship on Costco’s in-store media network and content strategy. PRN and Costco have collaborated on the network since its inception in 2004. 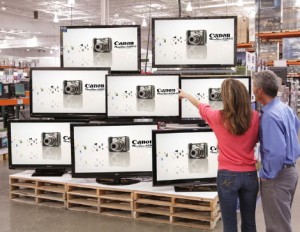 The Costco network operates in more than 400 warehouses in the U.S., and reaches more than 41 million members every four weeks (Costco HDTV Viewership Study, The Nielsen Company, 2008).

Costco currently operates 566 warehouses, including 413 in the United States and Puerto Rico, 77 in Canada, 21 in the United Kingdom, seven in Korea, six in Taiwan, nine in Japan, 32 in Mexico and one in Australia.

This entry was posted on Thursday, April 8th, 2010 at 15:04 @669 and is filed under Scuttlebut. You can follow any responses to this entry through the RSS 2.0 feed. You can leave a response, or trackback from your own site.