It’s always interesting to discover new things, and while the big players are usually front and centre at any show, it’s often in the small booths brimming the exhibit floor that one finds something really new and interesting as well. 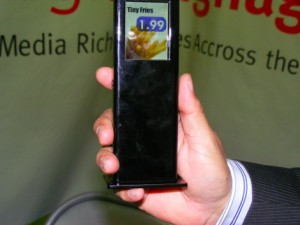 Such is the case for Munich-based Stinova Ltd.’s little MicroKiosk. Geared for the retail/restaurant trade, the unit has a 2” screen and can be of any height. (The one we saw was about 6” in height.) It can also be branded with a logo or symbol.

The media player can run on a battery life of 15 hours, on electricity, or on a battery pack – which could be recharged before announcing a weekly promotion, for example.

“We considered it originally for use at tables, but to avoid it being taken, it would have had to be screwed down, and then it would have been difficult to run an electric cable for those who want,” says Satinder Abluwalia, senior consultant. “So we see it more for use near a till, or where people are waiting for a table.” The MicroKiosk can be programmed to notify when a restaurant table is ready.

The restauranteur or retailer can use it for various promotions and easily put in the information similarly to using a USB key or card. The unit can carry up to 256 megabytes internally or two gigabytes extendable – making it easy to run a video.

Stinova, which unveiled the unit for the first time at the show, provides the unit table-ready. It sells for approximately $150 as a one-off.

This entry was posted on Thursday, May 6th, 2010 at 16:07 @713 and is filed under DailyDOOH Update. You can follow any responses to this entry through the RSS 2.0 feed. You can leave a response, or trackback from your own site.