The FBI‘s recent capture of a reputed member of the Gambino crime family has pushed the number of bad guys apprehended thanks to Clear Channel Outdoor digital billboards to more than 25. 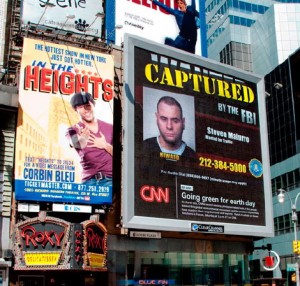 Steven Maiurro was placed on the FBI New York’s Featured Fugitives list on Tuesday, April 20. Investigative efforts and publicity led Maiurro to call the FBI’s New York Office on Thursday afternoon, April 22. He surrendered later that evening. Maiurro faces federal charges for his alleged involvement in a sex trafficking operation run by the Gambino Crime Family in Staten Island and Brooklyn, New York. Maiurro is charged with four counts related to sex trafficking.
:
Apparently, people who saw Maiurro’s picture featured on various media outlets, including the Times Square Clear Channel digital billboard, had alerted him that his picture was everywhere.

“We often ask for the public’s assistance in locating wanted fugitives,” says Richard Kolko, special agent. “This case is a great example of how publicity serves as a valuable tool in assisting our investigations.”

This entry was posted on Sunday, May 16th, 2010 at 08:40 @403 and is filed under Scuttlebut. You can follow any responses to this entry through the RSS 2.0 feed. You can leave a response, or trackback from your own site.