Christie [1] projectors play a integral role at the Klimahaus 8°Ost [2] in Bremerhaven, which looks like a giant droplet that a Bremen-based architect has placed upon the port facilities. 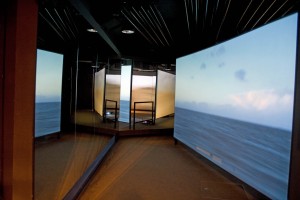 The building is 125 metres long and 82 metres wide, with a 1.5 kilometre path leading through the exhibition space of 11,500 sq. meters, running from Bremen via Switzerland into the deserts of Africa, the Antarctic and back via Samoa, Alaska and the Hallig islands. The journey follows the eighth degree of longitude, which not only gave its name to the project and marks its location, but also indicates the thematic aspects of route, places and climate zones.

Amptown System Co [4]., Hamburg, responsible for the technical implementation, was honoured with the Sinus – System Integration Award 2010 in the category ‘information’ for its sophisticated installation of audio, light, video, media and control technology as well as for its creative system integration

Apart from the sophisticated audio, light and media technology used, some 60 Christie DS305+ projectors are in operation at the Klimahaus. The basic idea of the planners and developers Kunstraum and Petri & Tiemann [5], Bremen, was to represent the subject of climate in all its aspects in order to make visitors curious, recognise connections and develop their own initiatives about climatic and environmental protection.

It takes two hours to do an initial walk around and at least half a day for those who want to listen to the explanations and watch the many films on their way. Specially-produced films run in the virtually countless rooms, chambers, caves, huts and landscapes. There are portraits of original inhabitants and tribal chiefs, of children or people with no opportunities of education, whose existence is threatened by climatic change.

While the rooms show the respective places, the explanation in the Klimahaus is by films that are specially produced for each stage. This material uses some 100 screens and about 60 projections.

The projections hit all types of shapes and surfaces. Hundreds of objects were specifically designed and built for it and overlaid with a projection foil. (Most of this material was provided by Gerriets [6], Umkirch.) The positioning of the projectors was important.

“With almost each of the 60, we were facing the same problems,” says Michael Staats, project manager assigned by Hamburg’s Amptown System Company. “The projection distance had to be minimal and the projected image enormous, wherever possible.”

Planner Heiko Wandrey carried out field tests at an early stage and identified the Christie DS305+ as being the most suitable projector.

A decisive argument was the lens image circle diameter and the size of projection that could be achieved. The devices work with 1:1 optics and a mechanical lens shift of 100%. This was the only way that projections could be used to – in some cases – fill a room. There was not enough space to simply move the projector further back. There were only 10 instances where mirrors had to be installed.

Christie provided the ideal solution in combination with its Hamburg-based specialist VisionTools [7], Hamburg. ROKU HD-2000 flash card media players are used in the Klimahaus 8°Ost and each projector has its own dedicated media player. Only in the case of complex interactive images was recourse made to separate PCs as media players. And each projector mounting device is unique. all made by ASC.

The entire project is controlled by the Medialon Manager Pro V5 [8], a server software package.