We had a lot of 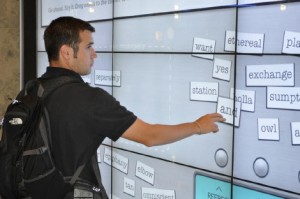 [1]interest in our story earlier this week with regard Clear Channel Airports DOOH gesture installations [2] with Monster Media that we thought we’d follow it up with a bit more detail.

Whilst the signage Monster Media [3] is installing in the various airports has gesture-based capability, what is being installed is the first ever multi-touch display of this size used in an airport environment.

Travelers now have a way to stay busy during their downtime caused by layovers and flight delays with a groundbreaking multi-touch display. The massive nine linked LCD screens allow users to access a word bank to create and submit original works of poetry through a simple touch. For inspiration, participants can view previously submitted poems, or call on their memories of their favourite poets. 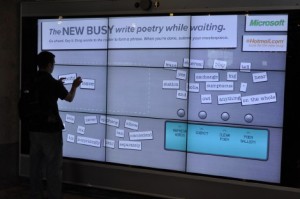 [4]The approximately 8’ by 12’ multi-touch experience broadens the boundaries of immersive technology and allows for greater user engagement. With this innovative feature, the number of people capable of executing their works of art at one time is limitless. However, the system only permits one user to activate the system at a time.

“People who thrive on being busy now have something new and productive to do that will keep their minds off watching the clock while they wait,” says Chris Beauchamp, CEO of Monster Media. “A multi-touch system has never been done on this scale before and we are thrilled to fuse together this groundbreaking technology with such a catchy concept.” 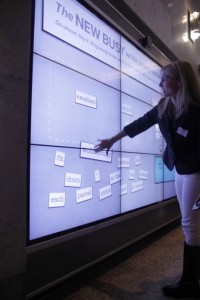 [5] Clear Channel Airports, joined forces with Outdoor Advertising Group [6] and Creature [7] to present Microsoft Hotmail [8] with this experience in SEA TAC. The Microsoft Hotmail ad launched today and will run through June 30. Monster Media will monitor the display around the clock and track the total number of users to provide Microsoft Hotmail with an accurate ROI.

SEA TAC is a new venue for Monster Media, who currently has over 30 installations in airports domestically. This permanent system is the first to have multi-touch added to the gestural and mobile phone technology that already exists on all Monster airport displays.

Monster Media’s immersive experience within the Airport Venue Arena is quite impressive – Clear Channel’s adoption of this model is a testament to their commitment to embracing new digital technologies.