NIVEA FOR MEN, official supplier to the England football team, this week announced the launch of a digital-out-of-home (DOOH) advertising campaign to run during the 2010 FIFA World Cup, specifically aimed at reaching England fans in the days around England games. 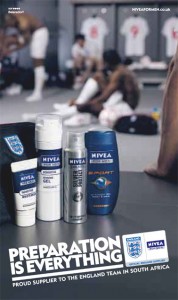 [1]The campaign will run in four-day bursts around each England game on selected high street sites in England from atmAd’s national network [2] of over 6,000 digital screens. Being an Official England Supplier, NIVEA FOR MEN have already begun their campaign to support the England football team. This atmAd element will form part of their outdoor campaign and will allow NIVEA FOR MEN to create day-specific, tailored messages that will reach fans on the high street, during key ‘game fever’ periods.

Andy Rawle, NIVEA FOR MEN Marketing Manager told us “As one of the official suppliers of the England football team, the 2010 FIFA World Cup is an important event for us and allows us to talk to our target audience in a very specific and relevant way.”

The creative concept, ‘Preparation is Everything’ developed by Draftfcb [3] London, focuses on the preparation that goes on before a game. The core idea behind the campaign positions the brand as part of the team’s essential grooming kit. The creative expression of ‘Preparation is Everything’ is portrayed through the ads which will feature NIVEA FOR MEN products inside the changing room.

Justin Stark, National Sales Director at atmAd told us “There are a number of brands who are looking to reach consumers during the 2010 FIFA World Cup. Our recent Consumer Next Action Report revealed that almost a third of consumers would be more receptive to World Cup based marketing if there was relevance and a level of creativity built in. The combination of NIVEA FOR MEN’s strong brand association with the England football team and their targeted approach will ensure that we are able to deliver a very successful campaign which will hopefully be matched by the fortunes of the national team.”

With over 6,400 screens nationally and a monthly audience of over 50 million, atmAd’s network delivers unparalleled digital out of home audience reach, capturing consumer attention and delivering extended dwell time and clear messages through contextually relevant content.