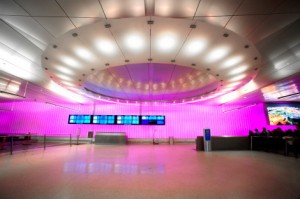 Under the City of Los Angeles’ Public Percent-for-Art Program, the renovation of the terminal required that 1% of the construction costs be designated for public art. LAX collaborated with the L.A. Department of Cultural Affairs [4] to create a permanent video art program for arriving passengers and visitors to the airport. Seventeen artists/artist teams were commissioned to produce original video artworks. 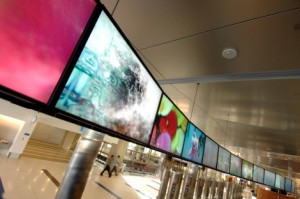 [5]The video artworks can be viewed at two venues within the Arrivals Lobby. One is a linear strip of video monitors consisting of 29 back-to-back, 46-inch LCD screens for a total of 58 screens suspended from the ceiling, configured in a serpentine shape with an overall length of 90 feet. The other is a media wall composed of 25 46-inch screens in a 5-screen-by-5-screen matrix.

The entire series of videos is titled ‘See Change’ and feature motion as a site-specific theme. The selected artists were asked to address the context of LAX and the City of Los Angeles to create an impressive and active environment through video art. 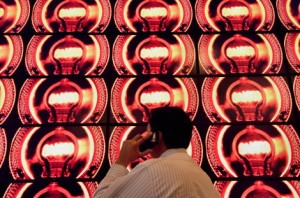 [6]are from California, New York, Texas and Illinois. The art is presented on a Media Control and Display System designed and programmed by Jon 9 of Holonyne Corporation. This system represents a new paradigm in digital artmaking: the highly integrated convergence of video and computers. The system includes 60 networked media servers that provide the artist with a broad palette of real-time programming capabilities.

The video art installations provide dramatic and experiential media for the global travelling community. The art technologically enhances and stimulates the space, contributing to an overall positive and engaging experience at LAX.