SpinetiX [1] could do a lot more damage in the industry if they just knew how to spin (no pun intended) what they have and create some real excitement about solutions that can be put into place using their Hyper Media Player hardware appliance, see for example our prediction a long time ago ‘Ultra Small Form Factors Will Drive New Markets’ [2] rather than the continuous stream of technical and engineering announcements that do them little good in creating buzz. 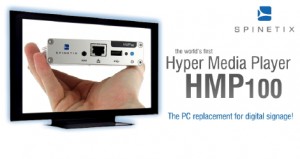 [3]In the latest announcement, ahead of #InfoComm2010, we see SpinetiX and Scala tell us that their systems can now be integrated together to create ‘cost-effective, flexible and reliable digital signage solutions without the need for a PC‘.’

Signagelive [6] for example can offer you an Advantech ARK-DS303 support for a third of that or the XMP-120 from IAdea for a fifth of that.

Thanks for the mention, the Spinetix product is a great high-end integration product and is well received by the ProAV guys looking for a multi-faceted device.

The challenge is that the mass market for 90%+ of digital signage applications can be served by SMIL and low-cost PC platforms that offer tremendous value for money at a fraction of the price.

To see how easy it is to setup and run a SMIL device is, take a look at [7]