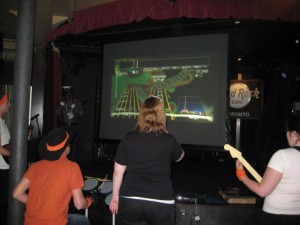 digital out-of-home companies presented a fun agency competition recently that not only drew attention to their properties and the DOOH industry, but also ended up benefitting a charity.

The event was a showcase for Outdoor Broadcast Network and Clear Channel Outdoor Canada’s digital board networks, demonstrating just some of the key features digital screens offer.

Agencies were invited to compete in the second Battle of the Agency Bands by OBN and Clear Channel, both of whom have major outdoor screens across from each other in Toronto’s busy Dundas Square area. To enter, ad agencies (both media and creative types) were invited to compete in the popular digital game Rock Band. The setting was the Hard Rock Café, from whose windows both OBN and Clear Channel properties could be seen. 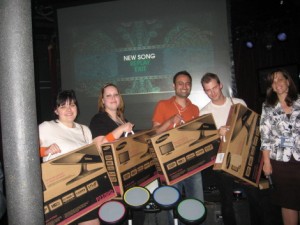 Agency 59 won a four-week digital screen campaign from OBN and Clear Channel for their charity of choice, Amnesty International. The winning team was made up of Michelle Thompson, Skyelar Menard, Ketan Manohar, and Mitchell Stratton (L to R in attached photo), shown receiving individual prizes as well from Dora Alexander of OBN). The team scored an impressive 1.2 million points on their first of two songs.

In addition to the Battle of the Bands, other fun gaming took place during the evening, with participants using their mobile phones to play real-time games on OBN and Clear Channel’s large digital screens in Dundas Square, seen by the general public on the streets as well as from the Hard Rock Café windows.

At the end of the 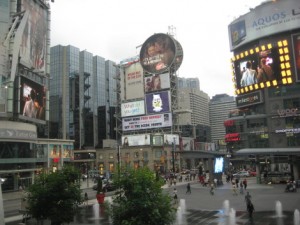 evening, all participants were photographed and their images transmitted to the digital screens. A spinning software randomly select one winner’s picture that flashed up on all Dundas Square screens simultaneously, with that participant winning a grand prize of a 46” Samsung 3D TV with Blu-Ray player, courtesy of Samsung who partnered with OBN and Clear Channel.

An array of other digital prizes from GPS devices to digital picture frames were also presented.

This entry was posted on Monday, June 7th, 2010 at 09:18 @429 and is filed under Scuttlebut. You can follow any responses to this entry through the RSS 2.0 feed. You can leave a response, or trackback from your own site.