The Toronto agency doug & serge inc., which for several years has been handling advertising for the Canadian Film Centre’s Worldwide Short Film Festival with a variety of creative ideas to appeal to today’s short-attention-span public, was at it again this year with a colourful bus featuring an inside screen. 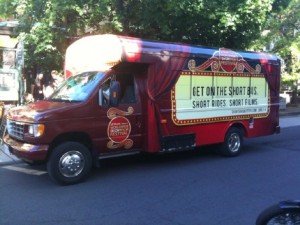 The Festival continues to celebrate why ‘shorter is better’ in promoting the annual festival which just ended in Toronto. With the newest integrated campaign developed by doug & serge inc., the CFC continued their use of light-hearted advertising to promote the relevance of short films in today’s media saturated environment.

“Over the number of years we have worked with the doug & serge team, our box office results have doubled,” says Barry Patterson, director, marketing and communications at the CFC. “The team tapped this wonderful insight about short attention spans that has fed a wave of great creative thinking to help us promote the festival. We added new components this year by taking to the streets with a new Short Film Bus and contest in conjunction with Eye Weekly to complement our usual fun and provocative creative.”

Featured this year was the WSFF Short Film Marquee Bus, complete with the in-bus viewing screen, which offered tourists and residents short rides on Toronto streets during which they could view short films for free and purchase tickets to the festival.

This was in addition to transit advertising proclaiming ‘The End is Near’; television and cinema ads featuring a variety of funny attention-span-challenged characters; a long-copy print execution featuring an incredibly long message for those looking to test their attention span; and online videos featuring key moments where shorter is definitely better.

There was also a complementary contest featured in Eye Weekly and on Facebook with the opportunity to win the Short Bus for an evening for the winner and 18 friends, plus other prizes.

This entry was posted on Monday, June 7th, 2010 at 03:55 @205 and is filed under Scuttlebut. You can follow any responses to this entry through the RSS 2.0 feed. You can leave a response, or trackback from your own site.