Twelve United States presidents have thrown the first ball of the season at the Opening Day of a new Major League Baseball season. 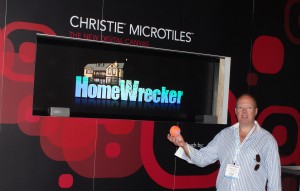 Our editor in chief felt a little bit like that (so he rang to tell us back in the office) when he sneaked onto the #InfoComm2010 show floor late Tuesday afternoon to throw the first Nerf* ball type thing at the 10 MicroTiles (Issy-Neale Formula _5X2_5T_5T) shown to the right here.

Touch is by Baanto and how the game works can be seen in action here in a demo video, this game is sure to generate a lot of excitement on the Christie Digital Booth so make sure you get along to stand N1203 early to play it. Top scorer of each day wins an iPod Touch. All players get a really cool stress ball.

This entry was posted on Wednesday, June 9th, 2010 at 00:29 @062 and is filed under DailyDOOH Update. You can follow any responses to this entry through the RSS 2.0 feed. You can leave a response, or trackback from your own site.