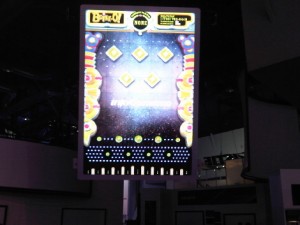 Featuring Christie’s most advanced projection and modular display technologies and interactivity from the three vendors, each of these interactive demonstrations are designed to deliver powerful audience engagement for broadcast, gaming, entertainment and signage applications. Each one shows endless possibilities for its use.

Christie’s MicroTiles, the new digital canvas, has already been used in a variety of distinctive settings including Expo 2010 Shanghai, national television broadcasts and the NASCAR Hall of Fame. The product features jaw-dropping, in-your-face resolution for up-close or distant viewing, brilliant colours, true blacks and a consistent stable image.

MicroTiles has a rugged and robust screen surface and is cool to the touch, which makes it perfect for interactive and touchscreen applications. It is also technology-agnostic – providing users complete freedom to work with any of the leading media players and interactive technologies. This is obvious at Booth N1203.

Baanto was established by Nytric Ltd., Mississauga, in 2009 to commercialize the proprietary motion capture technology it invented, and which is now the core of Baanto products. Shadowsense, Baanto’s revolutionary new touch technology, can be used in a variety of 2D and 3D applications in a way the company claims no other touch screen system can.

Working with Shadowsense, Baanto and Christie feature an interactive game called HomeWrecker, which will be presented on a 5-wide by 2-high Christie MicroTiles display. Show attendees playing the HomeWrecker game will be among the first ever to experience gaming interactivity in this innovative manner.

Christie has also teamed up with U-Touch Ltd., global specialist in touchscreen solutions, to bring an amazing experience in multi-touch technology on a large screen display surface. The U-Touch demo features a 96” (diagonal) rear projection Stewart Filmscreen StarGlas 100 laminated to a glass substrate, with integrated optical sensing touch components. The resultant display is ideal for broadcast sets, government installations, educational facilities, museums, corporate and retail environments. At InfoComm 2010, the U-Touch screen will be featured in a mock broadcast set and powered by the Christie HD8K projector.

Displayed on a massive 5-wide by 10-high MicroTiles display, Boink-O! is an interactive game that is controlled by players using their mobile devices and never.no technology. The never.no interactive signage platform enables audience participation by using any mobile phone as a wireless peripheral interface – in this case, a game controller. This technology is ideal for captivating and engaging large audiences by enabling active content browsing and selection, instant polling/voting, or controlling interactive games such as Boink-O!

Show+Tell, which specializes in designing and managing digital out-of-home media and dynamic environments, created Boink-O! as well as the M&M’s characters for the M&M’S WORLD flagship store in Times Square. It was also one of the content providers for the Christie MicroTiles New York launch in Nov., 2009. Boink-O! players at Booth N1203 have a chance to win an iPod touch.

Stewart Filmscreen, Torrance, California, whose product is used with never.no’s display, is the premier projection-screen manufacturer for both the residential and commercial markets. A family-owned business, it maintains the highest standards in screen design and craftsmanship, with each screen handmade. It has offices is offices in Denmark, the U.S. and Singapore.

This entry was posted on Wednesday, June 9th, 2010 at 04:21 @223 and is filed under DailyDOOH Update. You can follow any responses to this entry through the RSS 2.0 feed. You can leave a response, or trackback from your own site.