At InfoComm Wednesday Prysm, Inc. officially announced its new display solution, powered by its proprietary technology, LPD, Laser Phosphor Display (previously only seen in North America under wraps / in whisper suites and with pre-production units shown at ScreenMedia Expo in the UK in April). 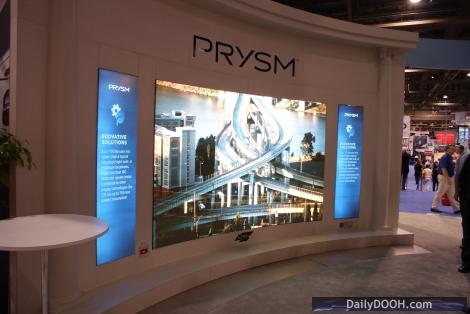 LPD’s are purpose-built to provide applications with brilliant image quality for increased audience impact, the widest viewing angles for greater visibility, seamless configurations for improved content delivery and message, and they quote “consume up to 75 percent less power than other display technologies on the market” – see our take on their energy efficiency claims here.

The units looked good. Prysm have listened to our mantra ‘Shape is the new king’ and even copied Christie Digital MicroTiles’ configurations in some instances (see (effectively) the Big ‘O’ here) for instance.

However, the stand was really nice and well laid out – we particularly liked the Roman feel to the surround of their giant video wall (they called it a ‘hero wall’ and it would look good anywhere but it gave part of the stand that ‘high-end retail’ feel and of course worked especially nicely in Las Vegas.

There were a variety of shapes and sizes on display and all showcased some nice content (obviously a lot of thought had been put into this – much more so than at previous events). We didn’t notice any ‘interactivity’ of any kind mind you but that will probably come with time.

Two of the displays (the large hero wall shown above and the donut wall) were powered by YCD Multimedia and several of the more free standing displays had enclosures built by the clever folks at Vertigo Digital Displays.

This entry was posted on Wednesday, June 9th, 2010 at 19:47 @865 and is filed under DailyDOOH Update. You can follow any responses to this entry through the RSS 2.0 feed. You can leave a response, or trackback from your own site.