As usual there were a lot of nice giveaways at #InfoComm2010 and tons more prizes to be won in the various games and competitions being run (though iPods and iPads seemed to dominate the prize category). 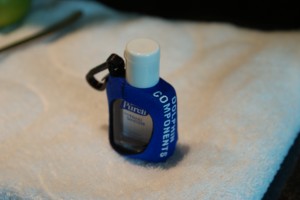 Everywhere we went we were handed bags of candy (sweets to those in Europe), key fobs (eBeam had a nice LED keyring light), luggage tags (really nice bright green rubber luggage tag from nVidia) but our favourite of all was this hand sanitiser shown to the right here.

Not only is it useful but a lot of thought had gone into it; it’s in a nice cute little blue jacket and on a keyring.

It was put together by Dolphin Components Corp. on stand N508 and Richard Stoll, CEO thought of the idea himself so hats off!

This entry was posted on Friday, June 11th, 2010 at 01:17 @095 and is filed under Scuttlebut. You can follow any responses to this entry through the RSS 2.0 feed. You can leave a response, or trackback from your own site.