Congratulations to SpinetiX who were just announced winner of NEC Best of #Infocomm10 award. We heard off the record that four of the five judges opted for this as the clear winner. 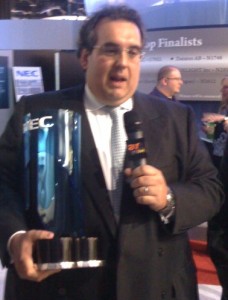 Who ate all the pies?

It’s an interesting choice as a winner and we think says more about the poor quality of the finalists in general as opposed to SpinetiX in all seriousness having the best product on show.

As we wrote last week “The HMP100 is a nice little SMIL player, but is still plagued with all the typical problems of an embedded system whilst retaining the cost of a PC-based player and software.”

The HMP100 is something like GBP 650 trade and GBP 1055 MSRP – Gefen were quoting USD 1599 for their be-badged version at the show. That’s a lot of markup either way and we are sure some will sell for less but no two ways about it this is an expensive product.

Bottom line: it’s a nice little box but how they are best in show with the same box, same software and same booth as last year, we don’t really know.

This entry was posted on Monday, June 14th, 2010 at 00:02 @043 and is filed under DailyDOOH Update. You can follow any responses to this entry through the RSS 2.0 feed. You can leave a response, or trackback from your own site.