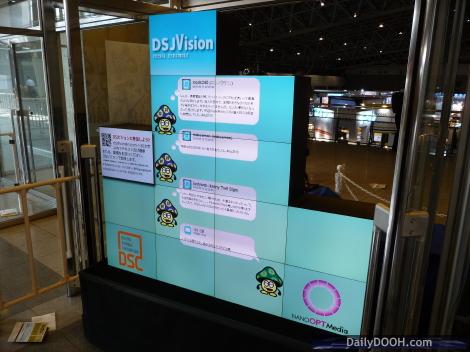 This is the first of a number of photos we have of Christie Digital’s Microtiles being used in a Skyscraper configuration – better described of course as _4X5_4T_4T_3T1H_HTTH_HTHH_ at the event.

The Social media scramble showed official @DSignageJapan tweets, replies and mentions, all tweets related to the DSJ show; messages mailed in by cell phone; and announcements from the show organizers.

This entry was posted on Monday, June 14th, 2010 at 10:17 @470 and is filed under Scuttlebut. You can follow any responses to this entry through the RSS 2.0 feed. You can leave a response, or trackback from your own site.