We had three conference calls on Monday with clients who could not make #InfoComm2010 and briefed them on what they may have missed in Las Vegas last week. The strange thing was “not much” – Prysm officially launched their tiled platform and we think everyone was unanimous in their opinion that the final product looked pretty good – much better for sure than the pre-production prototypes we had seen in whisper suites and on show floors up until now BUT as Gary Kayye said in his presentation at the Projection Summit the previous Tuesday “if it weren’t for Christie and Prsym there wouldn’t be much innovation in the sector at all at the moment”. 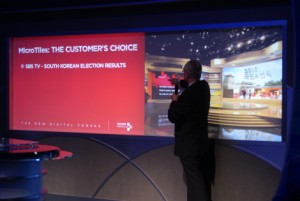 As usual what was not announced officially or what was ONLY hinted at was just as interesting and 20 minutes before the official Prsym launch we sat listening on the show floor to Bob Rushby, CTO Christie Digital and then Richard Heslett, MicroTiles product manager explain a little bit more about MicroTiles 2.0 – their next iteration of innovation around the MicroTiles platform (which is by the way still not yet a year old).

All of the above we think are scheduled for shipment in Q1 2011 except for the new screen which is likely much sooner – possibly even this quarter.

There were lots of new deployments mentioned also, some of which we have covered or rumoured here and others which were new to us. These included: –

They also hinted at a design win for a Presidential Library with 800 MicroTiles – we calculate at cost that alone is a USD 2 Million order!

We also heard on the booth that there might be some super secret ECU things in the works as well.

This entry was posted on Monday, June 14th, 2010 at 20:26 @893 and is filed under DailyDOOH Update. You can follow any responses to this entry through the RSS 2.0 feed. You can leave a response, or trackback from your own site.