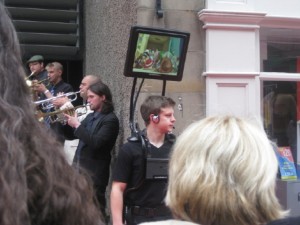 The experiential and guerrilla marketing agency Kommando who, to be fair, were mainly responsible for introducing wearable media to Europe back in 2002 (when they were one of the Pixman Nomadic Media VARs) have just launched what they describe as a new ‘Generation 2’ NomadiX human messaging system (which can be seen to the right here).

This entry was posted on Monday, June 21st, 2010 at 22:28 @978 and is filed under DailyDOOH Update. You can follow any responses to this entry through the RSS 2.0 feed. You can leave a response, or trackback from your own site.

One Response to “Human Messaging Systems?”