This Day In Music

This Day in Music is now available as an iPhone and iPad app but surely it’s something that DOOH networks would pay for also? 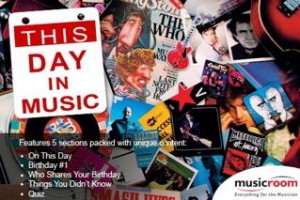 Thank you for the day...

Did you know for example that in 2006, ‘Echiniscus madonnae’ a new species of microscopic, water-dwelling, 8-legged water bear, was named after Madonna?

This is just one of hundreds of music trivia facts you can find on the new This Day in Music iPhone app. They also reveal for example…

Should you wish you can also see what song was No. 1 on the charts on the day you were born.

This entry was posted on Thursday, July 1st, 2010 at 10:45 @490 and is filed under DailyDOOH Update. You can follow any responses to this entry through the RSS 2.0 feed. You can leave a response, or trackback from your own site.