For the full year 2010, Screen Digest reports that it expects digital out-of-home in the UK to grow by 20%. Looking further ahead it says that “the London Olympics in 2012 should herald a surge in demand and we expect to see further investment in digital displays by the major players to capitalise on being the host city”.

Information taken from one of the company’s recent Advertising Intelligence service alerts it went on to say that “The digital OOH sector currently accounts for nearly 10 per cent of the total outdoor advertising market and its continued growth will help the market recover in 2010”. 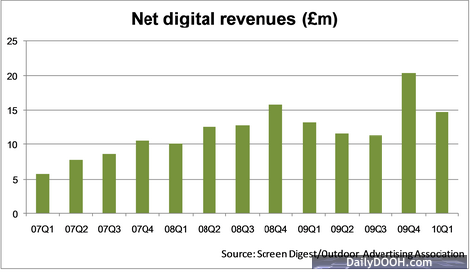 According to Vincent Létang, Screen Digest’s Head of Advertising said (about 2009) “Despite being fashionable, digital display was a new and unproven format. In challenging times when media buyers must deliver ROI they reverted to tried and tested traditional media and DOOH was sidelined. At the same time many of the smaller, independent players went out of business”.

Another key takeaway from the report is that advertisers are increasingly seeing digital out-of-home as an extension of video campaigns on TV or online, particularly for brands with products to showcase such as Canon, Samsung, Fujitsu, HTC, Currys and Sky who have all used the format in June 2010.

It also says that the outdoor market will benefit from greater expertise in creative agencies as they continue to develop techniques to maximise the impact of the digital format.

Next year of course the availability of more sophisticated media measurement from Postar should provide more detailed audience levels by location, encompassing transport systems, airports and shopping centres where digital displays are seemingly the most widespread.

The picture for digital out-of-home advertising in the UK is not entirely rosy, as Létang explains ”for the second half of 2010, Screen Digest expects out-of-home advertising growth to slow under economic uncertainty but the digital element should continue to outperform the sector, as it is driven by growing volumes and premium prices”.

Screen Digest is the pre-eminent firm of industry analysts covering global media markets. Headquartered in London, with offices in the US and Australia, we employ a team of 50 specialist analysts covering film, television, broadband media, mobile media, cinema, home entertainment, gaming and advertising. Our online services and reports provide the information and analysis that hundreds of media companies worldwide base their decisions on.

This entry was posted on Thursday, July 8th, 2010 at 10:14 @468 and is filed under DailyDOOH Update. You can follow any responses to this entry through the RSS 2.0 feed. You can leave a response, or trackback from your own site.