Interactive displays using touchscreens or gesture based technology are becoming so widely recognised by the public that even mainstream broadcast TV adverts are including references to the concept. One car ad currently playing in the UK shows a hand moving into the scene and “swiping” a change of background from one cityscape to the next. Another shows a hand touching an on screen menu to change the scene as if the viewer was using an interactive application at a kiosk. 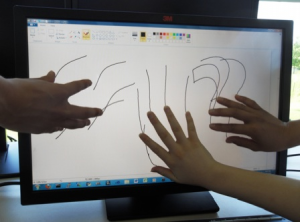 This recent surge has a lot to do with the widespread uptake of mobile touch technology (yes, including certain Apple products, obviously). But another important factor is the built-in support for multi touch in the Windows 7 operating system. This is making development and integration of touch input into general applications much quicker, and also relatively easy to deploy.

3M is at the forefront of this in the smaller panel sizes, and earlier this year at CES, they announced the M2256PW 22 inch LCD display. It’s based on projective capacitive technology and features the capability for 20 simultaneous touch inputs with a fast reaction time (said to be less than 6ms no matter how many touches). It was also recently seen at InfoComm 2010 in Las Vegas, where they showed it in a 6 panel wall, with a desktop spanning the whole canvas.

While this size of panel is too small for single large scale installations, it’s perfectly suitable for kiosk-type applications, and shows that the boundaries of size and number of touches are being continuously pushed. The technology also recognises touches when the user is wearing latex gloves, meaning that it’s suitable for medical and industrial applications as well. This screen is now generally available, priced around $1,500.

There is some useful background from a developer perspective on Dr. Dobb’s site, which also mentions some typical interactive application developers. Also this short video gives a flavour of what was being demonstrated at the SID 2010 exhibition in Seattle in May (Society for Information Display). We especially liked the virtual sound mixing desk which you could use to mix multiple sources in real time.

This entry was posted on Monday, July 19th, 2010 at 18:07 @796 and is filed under DailyDOOH Update. You can follow any responses to this entry through the RSS 2.0 feed. You can leave a response, or trackback from your own site.

One Response to “3M’s Multi-touch Monitor”