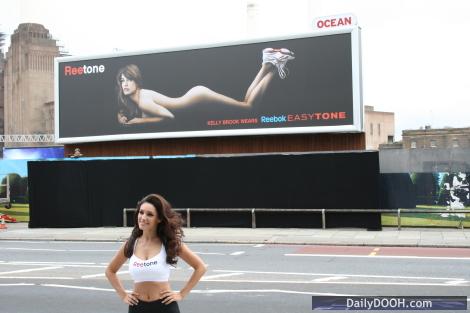 The poster, which sees Kelly Brooke posing in nothing but a pair of Reebok EasyTone trainers, was unveiled by the model herself on Ocean’s 96-sheet site on Battersea Park Road earlier today (shown above).

Running for 2 weeks from 4th until 15th August, the advert sits against the iconic backdrop of Battersea Power Station, which is passed by 670,000 people a fortnight.

Richard Malton, marketing director at Ocean Outdoor told us “The fantastic positioning partnered with the striking imagery creates a high-impact campaign for Reebok. With such an iconic back drop behind the ad and Kelly Brooke unveiling it, Reebok can expect a high return on investment. ”

The campaign is supporting the UK launch of the EasyTone products earlier this year; the campaign aims to show women under 30 that wearing the trainers can help tone muscles. The tagline copy states ‘Kelly Brooke wears Reebok EasyTone‘ alongside an eye-catching picture of her lying naked on her stomach flaunting the trainers.

This entry was posted on Wednesday, August 4th, 2010 at 07:29 @353 and is filed under DailyDOOH Update. You can follow any responses to this entry through the RSS 2.0 feed. You can leave a response, or trackback from your own site.

5 Responses to “Sticky: Kelly Brooke Bares All In Battersea”