Recently, mysterious, dark- digital monoliths have been sighted on the streets of Times Square NYC, its speculated that it must be advanced technology left by an alien race to enslave mankind. Don’t believe me?

Have you ever see the movie “Men in Black [1]” – everyone knows that the city of NY has always been at the epicenter of alien activity, (especially in the east village). 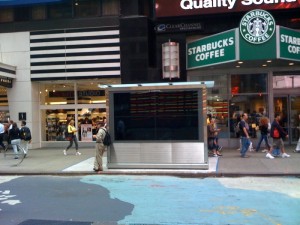 Actually, these are the real-life manifestations from an earlier post [2].

Under the cover of night, ninja-like install teams silently dropped these huge boxes on the street. If you ask me – CEMUSA [3], is one of the companies most likely to quickly usher us all into a world filled with pervasive, outdoor digital media [4] as depicted in BladeRunner. (not “Minority Report” [5])

It’s reported that the units will be firing up with mind-blowing content, sometime in October 2010. Keep an eye out for them. Thanks to S+T [6], I got a sneak peak at the content loop they’ve created for CEMUSA. All I can say is Wow! – special thanks to Genise Parker at S+T for the pictures- by the way, who’s that guy [7] leaning on the unit – a spokesmodel for the newstand?

very nice! i know that an agency media director first suggested these units to cemusa execs a few years ago, nice to see them listening to clients. now if they were really clever, they would figure out video on the roofs of the newsstands, facing up to the office towers. i could sell that for new year’s eve…

Manolo, interesting…I heard that these were also put in place to advance global warming, and that if enough units are placed on the Streets of the City of NY, the average air temp will warm up by 10 degrees.