Following our post a few weeks ago ‘More Digicom Departures [1]‘ we received plenty of emails from loving readers telling us that we wrote was accurate. 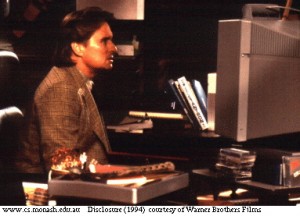 [3]Others wrote in to say that Digicom [4] is not a ‘happy ship’ at present – we particularly enjoyed the email from a one Michael Douglas – and yes we get the film reference, very clever, Ed.

Enough people emailed us to demonstrate that this wasn’t just a single disgruntled employee. There was a general outpouring of grief that Tim Butler had decided to move on: “Shame as Tim is brilliant!” one person said. It was also stated that management was “disappointed he’s decided to pull out of the operation on a full time basis”.

It’s okay losing staff of course, employee turnover is a natural state of affairs. In a company so young though you have to ask questions, especially when it seems to be good guys leaving, someone commented “Great professionals both with top reputations in sales and IT and the staff are gutted to lose them, both were very popular”

Anyway, although that’s two very senior people to leave in 1 month we hear that it may not be the last. Expect to hear of more departures shortly.

Is it really a surprise that recent high profile recruits to Digicom are leaving in droves?
Even the ex-CBS Goddard zealots, and there were initially plenty at the outset, appear to be waking up & smelling the coffee.

There are two overlapping reasons for this .Firstly, CBS Outdoor finds itself in a sorry mess despite operating the world’s foremost city transport franchise in the form of the London Underground contract. A combination of spectacular over promising of revenue to TfL (the franchise owner) at the last contract renewal secured in 2006 & a subsequent chronic & dismal under delivery against this contract was rumoured to have been so bad that it provoked the parent, CBS Corporation, to seek a termination of the entire contract last year fully six years before its natural expiry in 2015 & less than three years since it was signed .What’s this got to do with staff turnover at Digicom? Whilst the adverse impact of the recession has certainly been a factor in the troubles at CBS Outdoor as elsewhere, this is a convenient get out of jail card for the senior management team responsible for crafting and committing CBS to the TfL contract renewal, a senior management team that tellingly were all purged in 2009 – Clive Punter ,Tim Bleakley et al. Tom Goddard & former CBS technical guru ,Andrew Oldham, responsible for their original digital offerings & installation, got out earlier at their own choosing but if still at CBS last year it is apposite to ask would they of survived the bloodletting? Perhaps they saw the writing on the wall. It appears this writing it is now becoming legible to some of the CBS staffers who joined Digicom at the outset with so much blind faith in its founder’s repute & who now appear to be reappraising their views.

The second reason is simply that ,as a business model, Digicom isn’t any good. No disrespect to the patrons of Tony & Guy nor Spar convenience stores North of the Border but I don’t see advertisers beating the Digicom door down to reach them. And its chances of success are further diminished by the preoccupation of its founder & owner-Tom Goddard –with his part time Chairman role at Ocean Outdoor Advertising (and a number of other international outdoor companies) the innovative digital outdoor company where its founder was ousted six months after Goddard took up the role and replaced by, firstly Andrew Oldham on a part time basis & then Tim Bleakley who must still be pinching himself & thanking his lucky stars (or more likely Tom Goddard) for getting another high profile opportunity in the forefront of Out of Home after his humbling experience at CBS Outdoor where his arrogant sales policy was rumoured to have finally worn out the patience of media buyers already exasperated by lacklustre & unreliable digital technology. Good luck to all those Digicom staff, those that have left and those that soon will…..