The Media Merchants [1], Toronto, is the company behind an interactive, motion-sensing video wall delivering the new Telus [2] campaign in Toronto, Vancouver, and soon, in Montreal. 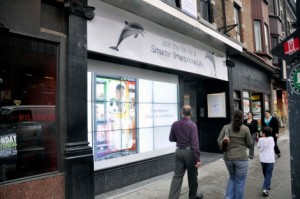 [3]storefronts with the use of the 6’ x10’ HD 1080P LCD video wall, the large display is garnering a lot of street level attention for its interactive and immersive advertising experience.

A gesture-based triggering system allows the viewer to use body movement to aid in reaching the endpoint of the video. He/she can manipulate video actions through his/her own movements, eventually reaching the goal of selecting and learning more about a Telus Smartphone device of choice.

Creative content for the campaign is by TAXI [4], Toronto, with the media buy handled by Media Experts [5]. 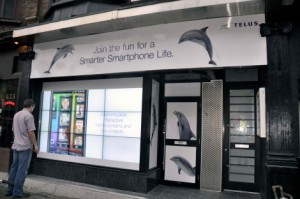 [6]Creating an opportunity for the pedestrian to interact with Telus’ fun and cheeky dolphin is an example of how The Media Merchants create immersive advertising that’s fun and engaging. With current placements in Vancouver (at Granville and Robson), Toronto (on College Street east of Bathurst) and, as of Sept. 1, on Montreal’s boul. St-Laurent, this is believed to be one of, if not the biggest execution of its kind ever in Canada. The storefront video walls will remain in place until late September.

“We have now seen a long awaited increase in interest from the market and are excited to bring a more engaging form of advertising for everyone,” says Brad Foster, president. “The Media Merchants have been offering this type of service for over a year now, executing Canada’s first ever interactive storefront in August of 2009 for Dusk TV [7].”

Founded in 2005, The Media Merchants has become one of the larger non-traditional advertising companies in Canada, while most recently in early 2010 setting up global operations into markets such as in South Africa for FIFA World Cup.

This is way west of Bathurst, not east. Also it’s a blight. A waste of a storefront that for a glorified billboard.