BrightSign at Ripley’s Believe It Or Not!

Ripley Entertainment Inc. is now using a total of 72 BrightSign solid-state digital media controllers to deliver compelling exhibit displays in six of its Ripley’s Believe It or Not! Museums.

Now in its 60th year 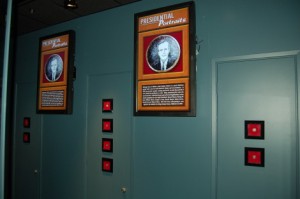 of operation, Ripley is the number one small tourist attractions company in the world. The museums include the recently re-opened San Francisco Ripley’s Believe It or Not! Odditorium, where 25 new BrightSign digital media controllers were added as part of a US$5 million renovation.

BrightSign digital media controllers are complete, end-to-end signage solutions that include the hardware, software and networking support. Featuring a solid-state platform, BrightSign players provide Ripley museums with the reliability they need to run their displays 24/7 because there are no moving parts to fail. Company management says that they are also more affordable, since they don’t require a PC to deliver crisp, HD playback. 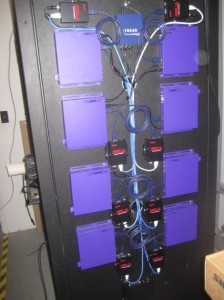 “Reliability and playback of the highest quality were key factors in selecting BrightSign, but we also needed a solution that was easy to install and easy to use,” says Louis Aguila, IT analyst at Ripley Entertainment. “The BrightSign controllers are compact, plug-and-play devices that can be quickly and conveniently hidden directly behind the displays. And, with the BrightAuthor software that comes with each player, we can create presentations fast and easy without writing code. The software even bundles together all the necessary content and playlist files it needs for playback so it can be dropped onto an SD card for immediate playback or shipped to one of our museums.”

For a Magic Genie exhibit, Ripley’s employs a capacitive touch technology connected to BrightSign’s GPIO port. With this capability, visitors can rub one of three genie lamps to trigger different video playback and hope that their wish comes true.

In another exhibit, a 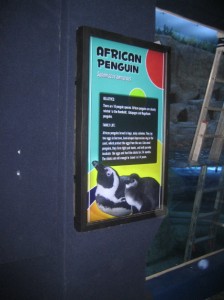 The flexibility of the BrightSign digital controllers enables Ripley Entertainment to use them for a wide range of applications. In addition to the BrightSign-driven synchronized video walls in the San Francisco Ripley’s Believe It or Not!’s entrance, there are new video and image-zoned displays explaining the unique features about exhibits throughout the museum. Other exhibits include a moving sightseeing train exhibit that uses BrightSign’s synchronization capabilities to make visitors feel as though they’re riding the train and looking through the windows to see the passing landscape. 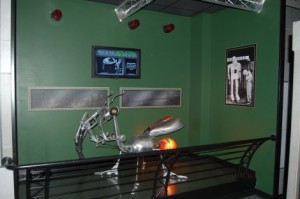 One of the more unique visual art displays at the San Francisco museum is a larger than life kaleidoscope. Using a ceiling mounted projector and huge mirrors, BrightSign drives the mosaic video playback of colorful, video patterns projected on the walls and mirrors. The effect is like walking through a kaleidoscope maze as it creates an optical illusion of an enclosed room and conceals the pathway for visitors who must find their way to the next area.

Other Ripley locations where BrightSign players have been installed to deliver a huge multi-screen video wall and fun-filled interactive exhibits include the Gatlinburg, Tennessee, Ripley’s Believe It or Not! and Ripley’s Aquarium of the Smokies, where a total of 29 BrightSign solid-state displays have been deployed; Ripley museums in El Paso, TX; Ocean City, MD; Myrtle Beach, SC and Surfers Paradise, Australia. Another 25 BrightSign players are scheduled for the Hollywood, CA Ripley’s Believe It or Not! Museum later this year.

This entry was posted on Friday, August 27th, 2010 at 14:34 @649 and is filed under Scuttlebut. You can follow any responses to this entry through the RSS 2.0 feed. You can leave a response, or trackback from your own site.