With the recent addition of Schweizer Illustrierte [1], the iPad apps of seven reputable publications worldwide created with Zaandam, The Netherlands-based WoodWing [2]´s iPad publishing solution, have made their debut in August alone.

Among these are the 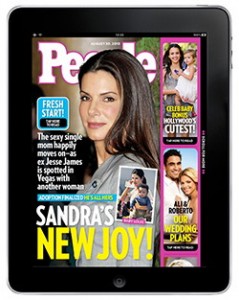 [3]business publication FORTUNE [4] magazine and the celebrity publication PEOPLE [5] magazine by Time Inc. [6]; the app of the Russian edition of Cosmopolitan [7]; and the auto publication Carros Magazine [8], from the Dutch publisher Pelican Magazines [9].

All have been created with created with WoodWing Software’s Digital Magazine Tools. The app of the Swiss-based Schweizer Illustrierte, the most recent of the group, is now available for download from the Apple App Store. The iPad issue was created with the new version 1.4 of the iPad publishing solution from WoodWing. 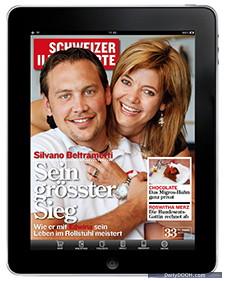 [10]Schweizer Illustrierte, the weekly published by the Ringier Verlag [11], a multinational media company doing business in Europe and Asia, is the most popular and widely read people magazine in Switzerland. The publication was founded 100 years ago and reaches 917,000 readers in Switzerland. In addition, its website, www.schweizer-illustrierte.ch [1], attracts 192,000 visitors per month and is the leading people portal in Switzerland.

The iPad app of the Swiss magazine delivers the same content as the print edition, with the exception of crossword puzzles. The technical implementation of the crossword puzzles is currently being developed and will follow in the coming weeks. The iPad edition, though, features more photos than the print publication, combined with videos and audio, making for a rich multimedia experience for the reader. The horizontal navigation strengthens the feeling of turning over the pages, while scrollable elements allow for more dynamic content. Hotspots enable the designers to integrate further information in an appealing way.  And for 360-degree views of certain content, the team uses HTML5 web elements. The iPad edition allows the integration of all elements, which Apple’s Web browser Mobile Safari can render on the iPad.

“The Schweizer Illustrierte celebrates its 100th anniversary next year, and with this application, we continue to be state-of-the-art even in the 99th year of our existence,” says Nik Niethammer, editor-in-chief, Schweizer Illustrierte. “Instead of publishing just an E-paper of the printed magazine on the iPad, we decided to strengthen the character of our magazine in an iPad-appropriate way. Our strength is the proximity to the stars and personalities from politics, business and entertainment. In our application, our readers become better acquainted with the stars with more pictures and exclusive videos.” 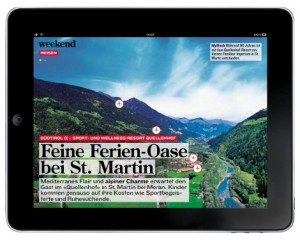 [12]enables readers to buy individual issues However, a subscription feature linking to the online kiosk of the Swiss magazine will come soon.   The team of the Swiss magazine developed the iPad app in close cooperation with the WoodWing Gold Authorized Solution Partner in Switzerland, the A&F Computersysteme AG [13] in Sursee, as well as with WoodWing Europe.

WoodWing Software, one of the innovation leaders in cross-media publishing solutions for newspaper and magazine publishers, will demonstrate its Digital Magazine Tools at IFRA Expo 2010 [14], taking place from October, 4-6 in Hamburg, Germany.