Despite hearing from several sources that Life Time Fitness had kicked REACH Sports Marketing to the sidelines, see ‘Life Fitness Kick Reach To Touch‘ back on 27th August it appears that the two are still working together – although we do get the strong feeling that it may well be only for the short term. 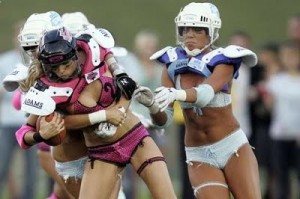 Only in America. Lingerie Football League.

“We originally rolled out our network without REACH but hired the company to handle local sales for us, and that’s still the case at the moment,” says Tom Link, Life Time’s senior director of media. “These days our goal is the continue to sell nationally, and to have our own turnkey operation, for which we have our own IT team and provide our own content.

Tom added “Our digital out-of-home operation is still only a small part of the operations of what is nearly $1 billion public trading company, but our goal is to grow it nationally and be profitable.”

In the meantime, REACH also says that the partnership is still going strong, and, although the industry has been challenging, agencies are now starting to book more.

Darren Wercinski, CEO and co-founder of Reach in Eden Prairie, Minnesota, says that now that Reach has shown some growth, bigger competitors are beginning to take notice. The company was recently named to Inc.’s annual 500, a ranking of the U.S. fastest growing companies. REACH claims a growth rate of more than 806% over the past three years, growing from $277, 000 in 2006 to $2.5 million.

However, Wercinski says that Life Time is not actually a huge chunk of Reach’s revenue. He says it is “way less that 25% – closer to 15%” . He says that the company is signing new partnerships and national buys and that it will have a story “about new advertisers and other stuff in about 30 days.”

Life Time Fitness has already scheduled the addition of three new – unnamed – clubs to its operations next year. The company currently is in 27 markets in 20 U.S. states. It has approximately 200 digital screens running eight minute loops equally divided between full-screen ads and club specific information, as well as another approximate 400 screens running a closed-circuit TV in-club network.

This entry was posted on Tuesday, August 31st, 2010 at 08:45 @406 and is filed under DailyDOOH Update. You can follow any responses to this entry through the RSS 2.0 feed. You can leave a response, or trackback from your own site.