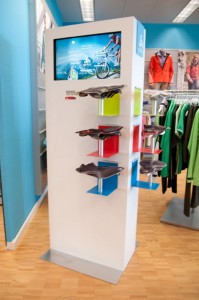 BrightSign digital players are at the heart of new interactive info towers developed for sportswear manufacturers ODLO to showcase a new range of high-technology cycling undergarments. Customers can explore product features and options via a combination of audio-visual presentations, touch screen interactivity and barcode scan abilities in kiosks designed and implemented by AV integrators Imaculix.

A prototype kiosk played its part in launching the ODLO cycling product line at the European OutDoor Fair during July 2010 in Friedrichshafen, Germany but it will also be a focus of attention on BrightSign’s stand (booth #DS19) at IBC 2010, which runs from 10-14 September in the Amsterdam RAI.

ODLO’s key goal in commissioning the kiosk design was to support the launch with a new approach to educate customers about the range. The company wanted to bring value to the product line, highlight it in a special way and especially showcase the technology behind new padding technology built into their cycle clothing.

The challenge for Imaculix was to provide ODLO with a high-end appearance on a modest budget. To ensure high reliability and simplicity in use, the solution would not be PC-based. Imaculix chose the BrightSign HD1010 media player as the alternative to complex PCs.

As Andy W. Bohli, CEO of Imaculix explained: “BrightSign’s exceptional HD image and video quality was a key factor for us, as our retail clients expect us to produce solutions that communicate their messages and branding to meet their very high standards. However, our customers, like us, are also budget-conscious and BrightSign is the only provider we’ve found that matches both criteria. In fact, it goes well beyond this, by also providing great reliability and versatile interactive features.”

As well as providing a visual display, the kiosk also features built-in shelves, allowing padding options to be showcased. The presentation supports 24 cycling underwear products; each with between five and nine hot spots of detailed information and all available in three languages: German, French and English.

A 23-inch touch display is integrated into the kiosk design. Through this, customers can browse the entire line of cycling wear using quick filters based on gender and categories. In addition, a Padding Finder application walks users through a series of questions in order to recommend the best padding and products for the individual usage.

The kiosk display can be powered on and off via an RS232 connection; and also through a remote control operated by store managers. Power control is implemented through built-in BrightAuthor software, which ensures that the display is the only item turned on/off. Meanwhile, the BrightSign unit remains powered-up, allowing it to receive remote content updates and enabling support where necessary via BrightSign Networking.

Following the successful debut in July 2010, ODLO plans to begin rolling out kiosks to retail outlets from March 2011 onwards. As well as the new cycle wear, products supported by the kiosk are expected to be expanded to include their entire active wear collection. For the future, the company also hopes that the same kiosks will prove successful as an educational tool for training sales teams on new products.

This entry was posted on Thursday, September 9th, 2010 at 18:21 @806 and is filed under Scuttlebut. You can follow any responses to this entry through the RSS 2.0 feed. You can leave a response, or trackback from your own site.