SA digiadvans have been nominated by Guinness to celebrate the famous Arthur’s day celebration in Dublin next Wednesday 23rd September. 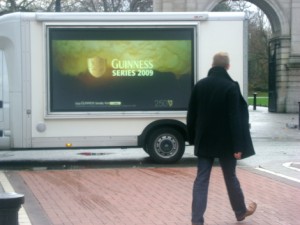 SA digiadvans will be used up to a week before the big day during the marketing campaign to highlight the day which is turning into something of a public holiday in Dublin.

During the campaign the general public are encouraged to mark the anniversary of the famous Guinness drink by taking a sample or two in the many pubs dotted around Dublin city centre. The digiadvans will also be streaming live footage from inside pubs as punters toast Arthur’s day at 17.59 to mark the year it was created.

This entry was posted on Friday, September 10th, 2010 at 12:42 @570 and is filed under Scuttlebut. You can follow any responses to this entry through the RSS 2.0 feed. You can leave a response, or trackback from your own site.