eCrisper: A Mac For A Kiosk

Yves Mailhot is offering eCrisper, for which he offers licences to museums, libraries, Internet cafes, retail outlets and others who want users to go specifically to certain web pages. 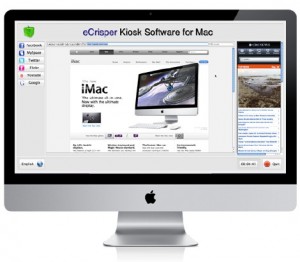 For example, a car dealer could have a Mac kiosk where potential customers could call up all information of the cars offered, but not able to go to other unrelated web pages.

“There are many advantages to using Mac computers for public access kiosks,” says Mailhot. “Among these, they have the most stable operating system – and the most advanced development tools.”

The eCrisper allows flexible access control: either offering free access or by requesting the user to login with a user name. It also allows for the addition of new languages or modification of existing ones.

The screen can be divided into 5 areas. Each area has a specific role and can be resized or hidden. And a logo and a main title can easily be added. One or two images, a title, and rich web content can be added in the top portion of the screen. The owner can configure the main web browser including the toolbar and where new pages are opened.

Mailhot, who was in the military and then founded Moonrise – another software company with a software called Netstop that he subsequently sold – says that he has sold licenses for eCrisper to varied users ranging from a museum in Toronto, to universities, to a credit union in the U.S..

“The whole premise of eCrisper is that it can be used for browsing whatever web pages that the user wants,” says Mailhot. A free trial of eCrisper can be downloaded from its website.

This entry was posted on Friday, September 10th, 2010 at 07:01 @334 and is filed under Scuttlebut. You can follow any responses to this entry through the RSS 2.0 feed. You can leave a response, or trackback from your own site.

One Response to “eCrisper: A Mac For A Kiosk”