Whilst the IBC Connected World section of #ibc2010 in Hall 9 was pretty impressive, the Digital Signage Zone inside once again severely underwhelmed. Hall 9 comprised three zones; Mobile, IPTV and Digital Signage but they needn’t have bothered at all with the latter. 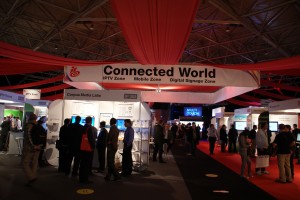 A souq or a bazaar

Hall 9 was dimly lit, perhaps a little too dark but it worked quite well and was well kitted out with nice ribbons from the ceiling. The hall itself seemed highly trafficked – the IPTV section in particular was always crowded. It helped here that the really nice shell schemes being used (in the shape of a cross – exhibitors could take one or more sections dependent on the size they needed) were packed in tightly – whether it was intended or not, the crowded nature of that layout, the low lighting, the ribbons from the ceiling gave this part of the hall an almost souq / bazaar feel about it. It was very well done.

The mobile zone was so-so – plenty of space amongst the shell schemes and not as good an atmosphere as in the IPTV Zone but still 4 or 5 times more exhibitors than in the DS Zone.

The DS Zone soon became our favourite place to go get lunch and a place to arrange to have meetings – so much empty space was there which had been turned over to comfy seating, tables and chairs. 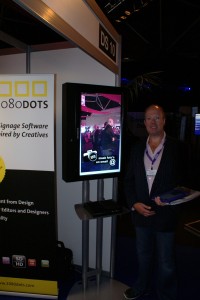 Brightsign, Multitouch, ONELAN and 1080 Dots were the only really recognisable industry people with stands in the zone.

Zero Creative took a fook-off stand (by far the largest stand in the area – probably 4 or 5 times larger than anyone else), obviously aiming to make a big splash and launch themselves into the industry but we don’t understand why they chose this event to do that?

They will have wasted 100K or more when some simple research would have shown that this has NEVER been a good event for digital signage. How do you think they’d feel if they knew that at least one of the other exhibitors in the zone had been given space for free to help make up the numbers and make the area look busy?

Quite simply they’d be far better off spending their money at #ISEUROPE or #ScreenMediaExpo next year.

Unless Daktronics were also given space for free we don’t quite understand why they were there as well. Daktronics are one of those companies that desperately need some help with their marketing. Not only do they get events wrong (and their position in the events) but also they don’t seem to have a clue as to how to show their product in the best light – alternating blinding any audience that walks past with far too bright LEDs and then showing poor content (Toy Story 3 excerpts on a 6mm LED close up are just plain daft).

It’s about time that the show organisers firmly pulled the plug on any pretence at having a digital signage zone – by all means try and attract vendors but if you do mix ’em with the rest of the show – Harris, Christie Digital and never.no showed some digital signage in the other halls but typically there wasn’t much around – not even Sony seemed to be promoting Ziris.

#ibc2010 is a great event for the broadcast industry and we thoroughly enjoyed our time there but when ISE can fill 2 halls in Amsterdam with Digital Signage year upon year and you can muster at best 3 or 4 vendors (even after several years of trying) then it’s time to cut your losses and admit defeat.

This entry was posted on Monday, September 13th, 2010 at 10:03 @460 and is filed under DailyDOOH Update. You can follow any responses to this entry through the RSS 2.0 feed. You can leave a response, or trackback from your own site.