Jones Digital Media has just announced a creative partnership with Lieberman Productions of San Francisco to develop the programming and creative strategy for their digital screens at Proacitv kiosks and carts in shopping malls across the US. 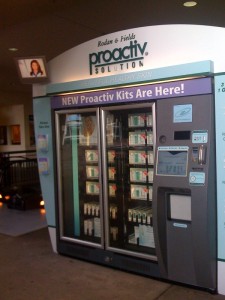 We first wrote about these screens back in January 2010, see post ‘Spot on location for Zit Zappers‘ and felt the kiosks themselves looked great, but the programming in the screens was just a re-versioning of their broadcast commercials – i.e. not the most effective use of their screens.

Jones Digital Media’s first task will be to bring the Proactiv branding to life with a series of on-screen elements that reflect the emotional intelligence of the brand as well as more venue specific segments with a strong call to action. With Proactiv’s sponsorship deals with major celebrities, we also hope to see some customized celebrity segments created specifically for these venues.

Usually known for their high quality infomercials, Proactiv has recently ventured  into brand-awareness rather than just direct response with their Be Proactiv campaign in magazines, bus shelters and on Times Square Billboards. Extending this brand building to digital out of home seems a natural fit and one that more brands should consider as a part of their media mix.

If given the green light, the  first round of creative should be airing on the screens sometime this fall, in time for the holiday season.

This entry was posted on Tuesday, September 14th, 2010 at 21:52 @953 and is filed under DailyDOOH Update. You can follow any responses to this entry through the RSS 2.0 feed. You can leave a response, or trackback from your own site.