The Media Merchants, Canadian non-traditional out-of-home company, partnered with Project Nightfire in a two-day 3D animated spectacle that is believed to be the first of its kind in Canada. 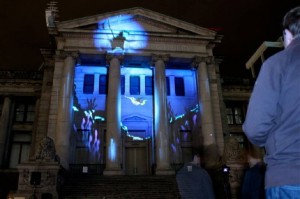 a collaborative art project that The Media Merchants worked on with Rival Schools, a Vancouver-based creative digital agency, and the Vancouver Opera. The project brought the historic Vancouver Art Gallery to life with captivating 3D projection mapping, all set to the beautiful opera piece Nessun Dorma from Turandot.

On September 10 and11, the event transformed The Vancouver Art Gallery into a stage for an entrancing splendor of 3D animation that took the audience on aan immersive and realistic journey. Rival Schools presented the story of a fallen angel’s rescue set to the music. The building’s façade acted as the canvas where the characters and scenes interacted using the existing architectural obstacles as part of the environment. 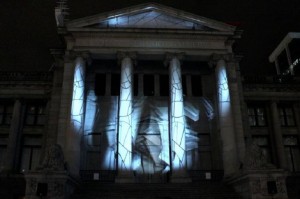 “This was an amazing event for us,” says Brodie Gunning, CEO of The Media Merchants. “Not only did we have the opportunity to be part of a production of such imagination and caliber, we were able to present a cutting edge medium for artists to display their works. This was an exciting but technically challenging exercise that The Media Merchants’ dedicated and experienced team could not wait to bring to life. In partnership with Vancouver Opera, The Vancouver Art Gallery and Project Nightfire, The Media Merchants have collaborated on an event that surely to captivated and enthralled all audiences.”

Founded in 2005 The Media Merchants has become one of the largest non traditional advertising companies in Canada. The company centres its attention on buildings, facades, walls, surfaces and giant windows, using projection based technologies. For Project Nightfire, The Media Merchants used Christie Digital Systems‘ projectors.

This entry was posted on Thursday, September 16th, 2010 at 08:18 @387 and is filed under DailyDOOH Update. You can follow any responses to this entry through the RSS 2.0 feed. You can leave a response, or trackback from your own site.