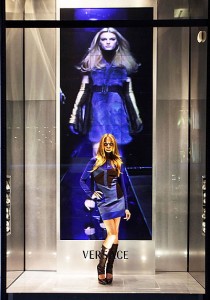 For New York’s 2010 Fashion Week Versace filled both of their Fifth Avenue storefront windows with 10’ tall by 4’ wide displays made up of Christie Digital MicroTiles which acted as the backdrop for live models wearing this season’s hottest looks.

The whole thing was put together by innovative design-build AV integrator. McCann Systems.

McCann believed (and of course they were right) that this display technology would make a much greater visual impact, offering both superior image quality and a much wider color palette.

On Friday, September 10th, the actual ‘Fashion’s Night Out’, Versace staged live models in their storefront windows while video – a Versace runway show – splashed across the MicroTiles (video) backdrop.

This entry was posted on Tuesday, September 21st, 2010 at 20:06 @879 and is filed under DailyDOOH Update. You can follow any responses to this entry through the RSS 2.0 feed. You can leave a response, or trackback from your own site.

One Response to “Versace? No, It’s MicroTiles, Dahling!”