Today was Digital Media day at Viscom Paris – at least as far as the conferences were concerned. APCAD President Marc Ballu confided that he’d been a little unsure at what level to pitch his presentation, since there was a wide spectrum of visitors with little in the way of advance information, knowing if any of the audience would already have some knowledge of the media BUT he needn’t have worried – the first conference session did a great job of presenting the industry to the neophytes and remaining informative for the rest of us. 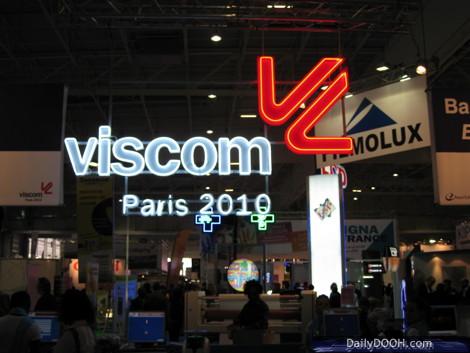 The good news is that Digimetrie studies now produce metrics in line with OVAB standards and in the same format as other media.  Moderator Raphaël Pinot told me later that this is seriously good news for the French industry – they can now start an information campaign towards ad-sales agencies and he feels that a breakthrough is close. 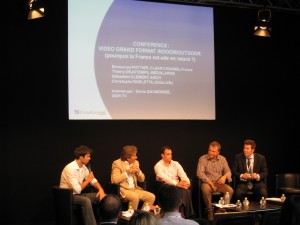 In the second conference, Bruno Fourdin,  Chief Editor for ZAP ITP, BNP PARIBAS, explained very clearly how the internal channel had been totally integrated into their overall communication strategy and culture – as well as a central team directing content they have an ad-how body of 50 staff who volunteer to contribute editorial content and this helps create the feeling that there is co-ownership of the network. Contributing staff are assessed on the value of their contributions by their peers and the results are included in their remuneration package. The other panellists did a good job of presenting what their companies do, which was a nice way of informing the public about the possibilities available, but at any other event they would have been given a red card for advertising. 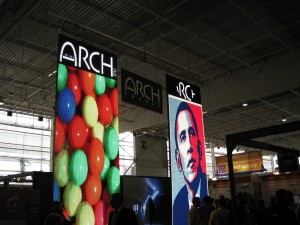 However, I must have missed the ‘Digital Media by Viscom Zone’ somehow. 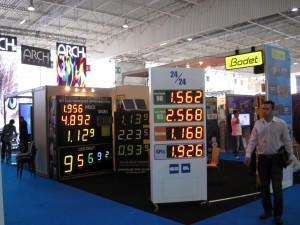 True, there were some exhibitors grouped together along a Digital Media alley, some of which were recognisable as digital signage companies (mainly LED screens).

I had the impression that once again they stretched the definition to include anything with an on / off switch – countless stands of digital printers and even a computer driven sewing machine that can neatly embroider any design that you can imagine! If you’re interested in knowing how that sewing machine works, you can check out https://sewmyplace.com/sewing-machines-reviewed.

Last year, Viscom and ‘Equipmag’ (a show for shop-fittings) were held simultaneously but at the same location, so visitors could hedge their bets and attend both shows. With Viscom moving out of town this year, this is clearly less practical. However, I had the distinct impression that the industry has decided that the Marketing at Retail Show (end of March) is and was the place to be.

This entry was posted on Wednesday, September 22nd, 2010 at 17:15 @760 and is filed under DailyDOOH Update. You can follow any responses to this entry through the RSS 2.0 feed. You can leave a response, or trackback from your own site.