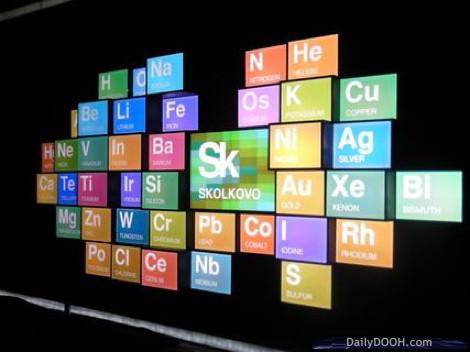 [1]This display is part of a new exhibition recently opened this month in the pavilion, promoting the ambitious Skolkovo [2] project outside Moscow, which Russians are referring to as the “Russian Silicon Valley”.

We think this is a very creative use of screen shape, with the screen design and content reflecting chemical elements and their symbols with references to the classic Periodic table [3] in chemistry.

2 Comments To "Creative Use Of 3D Space"

It doesn’t seem like you’d need to concern yourself with the depth (z-axis) portion of the description since you’re never showing more than one image in the same xy area. Rather, your description above is sufficient for describing the pixel mapping, and somebody could certainly make the right shape/size content from it.

Our aim is for it to be used to describe accurately the physical display as well, and it’s in that respect that the non-planar aspect needs looking at.