At 10:01 a.m. EDT this morning (Oct. 1/10), Harris Corporation [1], an international communications and information technology company, is joining the Orlando Magic [2] and City of Orlando [3] to celebrate the culmination of a year-long, multi-million dollar project: the opening of the new Amway Center [4] which is being touted as the most technologically advanced arena facility in North America. 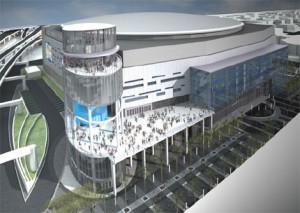 Home of the famed NBA Orlando Magic, the $380 millon Amway Center will provide fans of the Magic, other sports and entertainment events with extraordinary access to event coverage both inside and outside the arena – delivering more captivating video in higher definition, dramatic lighting and sounds, and an overall entertainment event that exceeds anything fans have previously experienced.

Among the special features will be the ability for every one of the 1,100 individual screens, managed by Harris, to all show every fan in the arena the broadcast of the action in real time. The screens will also give advertisers the opportunity for their advertising to be shown on every screen at the same time, as well, providing an unprecedented ‘moment of exclusivity’ marketing opportunity.

“Our new arena will set the standard for fan engagement in sports and entertainment venues,” says Alex Martins, president, Orlando Magic. “We took on this technical challenge with confidence because of our relationship with Harris.”

“The Amway Center really is the next generation for sporting venues,” says Buddy Dyer, Orlando Mayor. “With this Harris technology, the energy and immediacy of the live sports experience has been combined with the benefits of watching on your home entertainment system to create a superior fan experience.”

The state-of-the-art Harris solution comprises a high-definition video production and distribution and Internet Protocol TV system, integrated with digital signage. The solution’s enriched screen format presents all aspects of the Amway Center experience at 10 times the resolution of current technology.

Combining IPTV and digital signage over the same network allows the Magic to address more than 1,100 individual screens located throughout the arena with tailored content. Displays can be driven to show high-impact replays and highlights, venue messaging, out-of-home advertising, or any combination of the three

The network that drives all technology in the Center is managed via a Harris-built control room featuring more than 800 broadcast devices. Approximately 75 miles away, employees at Harris headquarters monitor the network 24/7 via a Network Operations Center – similar to the one that manages the nation’s air traffic control system – to ensure fans experience no interruptions during events.

The comprehensive production and distribution system includes all the components the Magic needs to present event action on scoreboards, television monitors and digital signage throughout the arena, in the front lobby and even in the parking garage entrances. The Harris system enables content on the screens to be changed during the event and updated to the network with no interruption to the screen information/graphics or live action. For the first time, every fan in the arena will experience broadcast of the action in real time – with no delays and no waiting.

The Harris system will deliver extraordinary audio-visual and sensory effects, while providing fans access to a universe of merchandise, services and information, such as traffic and weather updates, highlights of other sporting events and directions to seats, restaurants and other amenities within the facility. As all the digital signs are connected, important safety messages and clear directions – for example, in the event of an evacuation – can be easily broadcast throughout the Amway Center.

The network has been designed so that in the future, fans will also be able to receive applications via their mobile devices that allow them to enable their own experience in ways they choose, such as pulling up stats on an opposing team or finding data on the average free throws in each game by a particular player. 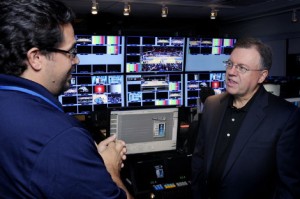 “Our partnership with the Magic and the City of Orlando has resulted in an unprecedented technology showcase for Harris and a next-generation venue for staging events that far exceed anything fans have experienced in the past,” says Harris Morris, president, Harris Broadcast Communications [7]. “And whenever the next killer concept arrives, the uniquely scalable
infrastructure we’ve put in place for the Magic will be ready. The fans will love the Amway Center today – but just wait until tomorrow!”

The Harris system will enable the Magic organization to enjoy improved staff efficiency, while at the same time enhancing the team brand. Displays in lobbies, concourses, concession areas and luxury suites can be addressed with individually tailored messaging and out-of-home advertising – providing significant new revenue-generating opportunities for sponsors and advertisers. The dynamic signs can present different products and messages every few seconds, and Harris software enables huge quantities of advertising to be efficiently scheduled, tracked and billed

The screens can also be used to bring fans to concession stands, where video menu boards make it simple to change the offer to coincide with various venue events. Concession price changes appear on any screen in the blink of an eye, and because the menu board is connected directly to the cash register, sale items will automatically be priced correctly.

Harris is also working with venue concessionaires, the City of Orlando and the Magic to enable the delivery of managed social media marketing services that reward fans with special offers and contests via multiple social media platforms and mobile devices.

And the sophisticated high-definition broadcast center, powered by Harris technology, will also enable hundreds of journalists and media to connect and report live on the NBA All Star Game [8] from Orlando – including video, still images, voice and data – broadcast worldwide in real time and with exceptional HD quality.

The tallest, high-definition videoboard in an NBA venue, the centre-hung video scoreboard by Daktronics [9] includes more than 9 million individual LEDs used in 18 displays. The scoreboard measures 42’by 41’ and weighs 40 tons. The four largest screens on the board each measure 17’ x 24’. Complementing the primary scoreboard are two LED ribbon boards mounted on the interior fascia of the seating decks.

The Amway Center’s exterior features a modern blend of glass and metal materials, and Daktronics is also behind the gigantic screen on the building’s exterior. It measures 46’ high and 54’ wide, and features ever-changing graphics.. A 180′ tall tower serves as a beacon amid the downtown skyline.
“

“Among the special features will be the ability for every one of the 1,100 individual screens, managed by Harris, to all show every fan in the arena the broadcast of the action in real time. The screens will also give advertisers the opportunity for their advertising to be shown on every screen at the same time”

In other words this is broadcast, not narrowcast. Isn’t this just a standard stadium install with a TV production suite and transmission over IP instead of coax?

“For the first time, every fan in the arena will experience broadcast of the action in real time – with no delays and no waiting.” – Haven’t we had that since the days of the Jumbotron cabled to a camera?

In other words this seems like a very ordinary stadium AV installation (albeit quite a large one) with a bit of signage tacked on, with an excellent PR team around it. I’m not sure how it fits with DOOH… Or am I missing something?