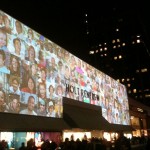 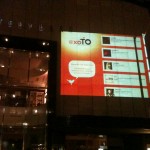 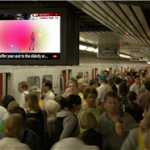 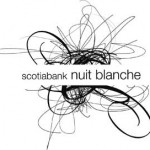 In some of the more notable installations, the facade of Holt Renfrew’s flagship Bloor street location provided an incredible backdrop for a Monument to Smile – a giant projection by the artist Agnès Winter in partnership with students from OCAD. The projection, masked to the facade of the building was timed to the musical theme Smile, written by Charlie Chaplin for Modern Times.

In another installation, the spectators took part in the artwork by Tweeting their message (sometimes less than PG-rated, as made evident by the ‘manual’ privacy filter administered live from the laptop in the near-by projection truck) to a projection on the storefront of Bloor Pottery Barn. Maybe LocaModa should get in touch with this guys to sell them on their automated filter technology?

Other notable projections transformed the walls of The ROM Crystal and Rhyerson University campus buildings, each showing various artistic interpretations of new media.

This entry was posted on Wednesday, October 6th, 2010 at 07:26 @351 and is filed under DailyDOOH Update. You can follow any responses to this entry through the RSS 2.0 feed. You can leave a response, or trackback from your own site.