Earlier this year, a two-part visitor study was conducted across Germany’s shopping malls by GfK (commissioned by ECE flatmedia) and found high awareness and good recall of digital advertising in the shopping environment as well as some 30 million plus impressions a week. 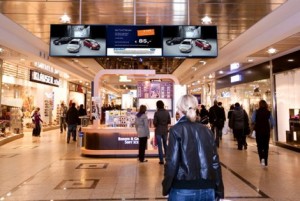 Oliver Poppelbaum, Managing Director ECE flatmedia told us “The GfK study confirmed our expectations that advertising in the shopping environment is effective. At the same time, we are now able to identify gross and net range, CPMs, target group potentials and recall value at the touch of a button and are comparable with conventional media through these performance levels”

The study also reported that 98% of German shopping mall visitors were actively aware of screens installed at the point of sale.

ECE flatmedia GmbH is Germany’s largest flatscreen network in premium shopping centres, has moving, digital advertising in over 40 malls and 20 major cities on almost 1,000 flatscreens supported by Scala and is also an active OVAB Europe member.

Dirk Hülsermann, President OVAB Europe told us “These results from the face-to-face survey clearly indicate the high awareness level of advertising on the installed screens”

Dirk added “OVAB Europe was first and foremost established in order to take up the cause of standardisation and transparent coverage measurement in the industry. This present study now clearly indicates that coverage in the DOOH industry is also measurable. As an association, we support this development and will do our utmost for a further standardisation of measuring methods in the future.”

The results of the ECE flatmedia study will also be presented at the 4th Digital Signage Conference, #DOOHBizKonf under the heading of ‘Simplifying the Digital Signage Business‘ which takes place in Munich on the 19th and 20th October.

In advance of that a summary of the study is available for download at www.ece-flatmedia.com.

This entry was posted on Thursday, October 7th, 2010 at 10:01 @459 and is filed under DailyDOOH Update. You can follow any responses to this entry through the RSS 2.0 feed. You can leave a response, or trackback from your own site.