“I don’t care what anybody thinks” – no, not said by yours truly but by Chris Riegel, CEO STRATACACHE who spoke up again recently in a local Dayton, Ohio newspaper interview claiming that he was well on his way to USD 250 Million revenue by 2012.

Chris told the newspaper “When building a business, sometimes you have to be able to take a stand and say ‘This is right, and I don’t care what anybody thinks‘ as a private company we have the ability to do that when many of our VC or Public company competitors are controlled by what the market thinks.

However, the quote in the interview even taken in context doesn’t do much to shake off the likeness, that some in the industry tag him with of being a P. T. Barnum [1] type figure. 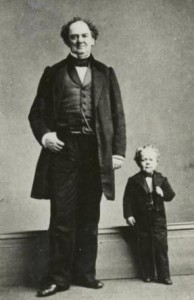 Chris and his Mini-Me

Umm, shall we pass the snake oil or shall we wait and see?

5 Comments To "I Don’t Care What Anybody Thinks"

I’d say a deal is when the money is in the bank.

The deal in question is at McDonald’s…. McCafe menu boards, a single large (NEC) screen separate and distinct from the main menu boards, which are not digital. Apparently still in pilot or they would have announced/rolled out.

McDonald’s has so many pilots going one has to wonder if any of them will take off, some day. Harris has had one going for almost two years now with little to show for it.

If the company was on it’s way to $250mm, you’d think they’d have something more than a small pipe and drape setup at some of the trade shows.

The first point is – What ever happened to the Stratacache Blue Max award? What that another PT ploy to get at all those little cool secrets for a shiny airplance toy? Who won?

McD has so many pilots some of us are going to retire while waiting. The plasmas in those pilot stores from last century have long died and been replaced with static backlit duratrans. A lesson learned from last century – Franchisees will never pay for anything (cool technology) that does not directly generate revenue or have a federal mandate.