Early yesterday we wrote ‘More Awards For Amscreen? [1]‘ and last night at UK and Ireland’s POPAI Awards we were proved correct once again with Amscreen picking up a well deserved reward for ‘Digital Media in Retail Network‘. 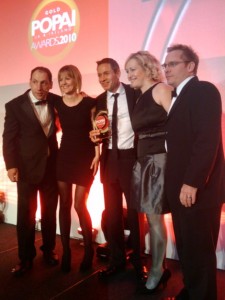 We were rather rude about JRI and its entry yesterday and we were wrong to do that – all the judges we spoke to said that the work involved with the second largest bank in Spain (after Santander) was outstanding and with resultant and proven ROI etc. In the end, even though fellow entrant Realisation entered as a very strong competitor it looks like the best team won.

Congratulations to all Gold, Silver and Bronze winners.