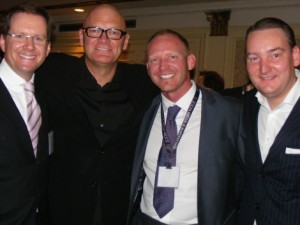 After demonstrating what he described as digital place-based advertising creative that’s either “cool stuff” or “boring crap”, Lavoie moved the audience from laughter to a rather stunned silence when he asked, “Okay, you have momentum, so where is DPAA’s future? Where are you going from here? In the not too distant future, our personal space will be totally redefined. What leadership role will the DPAA play?”

Lavoie offered up some ‘building blocks’ for the networks to move forward to engage agencies and ultimately their clients’ customers.

“Be more inclusive. Collaborate. Point to the future. Like a car manufacturer builds futuristic prototypes, define what the future will be and show us how far you can go.

“And showcase the ‘best of.’ The more you showcase, the more involved people will want to be. Think bigger about what the personal space can be and this will challenge agencies.”

This entry was posted on Thursday, October 28th, 2010 at 06:28 @311 and is filed under DailyDOOH Update. You can follow any responses to this entry through the RSS 2.0 feed. You can leave a response, or trackback from your own site.