Strike A Pose, There’s Nothing To It 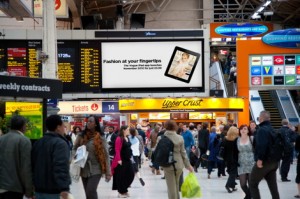 What Are You Looking At?

VOGUE will kick start this, their first ever rail station digital outdoor campaign, with a one-day ‘event’ screening, showing a special 1 minute 20 second ad, featuring clips from a Mario Testino photo story, and video portraits of the most successful supermodels of the decade, all of which come from the VOGUE December issue iPad app content extras.

Jean Faulkner, Marketing Director for Condé Nast told us “With unrivalled creative and production teams and first class contributors, VOGUE and WIRED have produced inspirational iPad digital editions that will fascinate and engage their followers. This exciting media first for VOGUE is rich with exclusive content, including footage from Mario Testino that will act as a teaser for consumers, revealing some of the magazine’s best work yet. Both ads have the potential to reach more than 2 million individuals, ensuring a powerful new reach for both brands.”

Spencer Berwin, Managing Director – Sales of JCDecaux should have said “What Are You Looking At?, Strike a pose, Strike a pose, Vogue, vogue, vogue, Vogue, vogue, vogue” but didn’t unfortunately and instead remained sensible and restrained and told us “These engaging and captivating ads will reach upmarket audiences on their daily commute . It’s fantastic to see both brands using JCDecaux’s digital portfolio to introduce their iPad apps in this exciting and unique way.”

The VOGUE December issue app is available for GBP 3.99 from the App Store on iPad or at www.itunes.com/appstore/.

This entry was posted on Monday, November 8th, 2010 at 11:31 @521 and is filed under DailyDOOH Update. You can follow any responses to this entry through the RSS 2.0 feed. You can leave a response, or trackback from your own site.