Amscreen just announced that they will be donating GBP 100,000 of free advertising space across its network to BBC Children In Need [1] – Amscreen will screen content for the BBC’s corporate charity across their forecourt, convenience, healthcare and leisure networks, which reaches a total of 25 million people a week in a bid to help the charity raise money for disadvantaged children and young people in the UK. 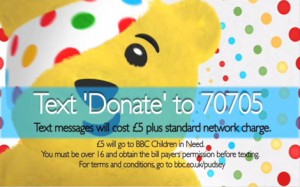 CEO Simon Sugar told us “Children In Need is a fantastic charity and we are pleased to be able to help in any way possible. By screening their content on the Amscreen network and conducting an interactive mobile campaign, we’re hoping to spread the word and get people raising even more money for Children In Need”.

The initiative will allow customers to donate £5 to BBC Children In Need by using a text to donate short code, and will run across Amscreen’s network until 30th November.

Amscreen, whose network broadcasts to over 3,000 sites across the country, will air the BBC Children In Need ten second advert on a 90-second carousel ahead of the charity’s spectacular live Appeal show on 19th November on BBC ONE.

Children in need is a great cause