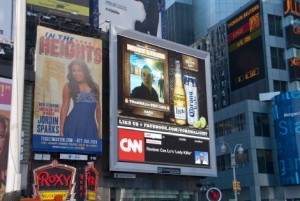 A multimedia campaign highlights the Corona Light brand through the use of social, mobile and digital outdoor mediums. Corona Light fans get the excitement of having their own face debut in New York City’s iconic Times Square via Clear Channel Spectacolor’s SpectacolorHD digital billboard by simply hitting the ‘like’ button on the light beer Facebook’s fan page and uploading a photo (at least 500×500) of themselves. Each photo runs for about four seconds, allowing for a maximum potential of 20,000-plus unique photos per week.

Further, a still image of each photo displayed on the screen is captured by Clear Channel Spectacolor’s high resolution web camera set across the street and sent back to fans.

In the one campaign, Corona is demonstrating the highest level of digital advertising engagement by very publicly thanking its fans, building up its Facebook page numbers and grabbing the attention of more than 500,000 people daily who have access to Spectacolor’s digital billboard in Times Square.

The Times Square Spectacolor digital board supports mobile messaging to nearby devices and serves as an anchor for experiential marketing programs with website tie-ins. This Clear Channel Spectacolor partnership opens up a world of possibilities for advertisers and marketers interested in integrating brand messaging into a highly effective and engaging multifaceted digital experience.

The Corona Light campaign will run until December 5, 2010.

This entry was posted on Thursday, November 18th, 2010 at 10:00 @458 and is filed under DailyDOOH Update. You can follow any responses to this entry through the RSS 2.0 feed. You can leave a response, or trackback from your own site.