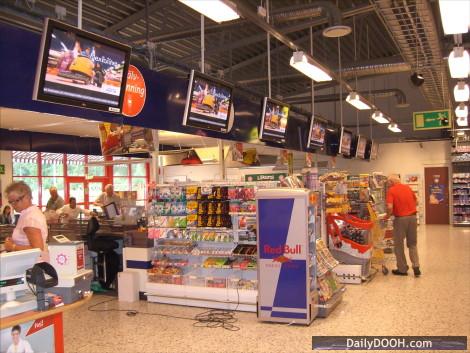 We only said last week “their have been some interesting announcements from the Scandinavian region recently – watch out for a spate of acquisitions also, led most probably by Neo Advertising” and today saw Neo Advertising go official with an announcement….

Christian Vaglio-Giors, CEO Neo Group declares: “We are proud to welcome in the Neo Group a pioneer in the Digital Out-Of-Home media. Q-Vision has succeeded over the last 15-year to build a strong local and regional customer base while establishing a nationwide network. By entering Neo Group, Q-Vision will be able to further expand its reach in Scandinavia and benefit from the expertise and network of one of the most experienced Digital Out-Of-Home Groups”.

Note the way that Neo are building up an interesting portfolio of supermarkets – another 200 here to add to the 140 that they added last week in the Netherlands – our story ‘SuperCoop And Coop Select Supermarkt TV’ as well as those they have elsewhere, like in Germany.

We believe that there are enough brands who will want to deal direct and cross border to make this an incredibly exciting revenue opportunity.

Neo have told us in the past that “this store format, i.e. supermarket and convenience store is not only the preferred format of the consumers but it is where DOOH has the stronger impact in term of recall and awareness but in term of sales uplift as well”

This entry was posted on Tuesday, September 23rd, 2008 at 11:51 @535 and is filed under Scuttlebut. You can follow any responses to this entry through the RSS 2.0 feed. You can leave a response, or trackback from your own site.