Scala powered the visual communications network at the Youth Olympic Village (YOV) at the inaugural edition of the Youth Olympic Games (YOG) held in Singapore from the 14 – 26 August, 2010. Nanyang Technological University (NTU) in partnership with Click Grafix were awarded the privilege to deploy and manage the digital signage for the Youth Olympic Games Village that housed over 5,000 Games officials and athletes from all over the world. 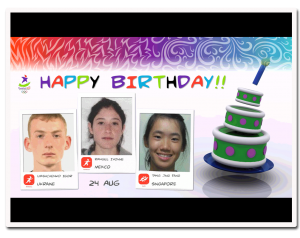 The dynamic integration between the web, social media platforms such as Twitter and Flickr together with Scala’s powerful platform, created an easy free flow of content that kept the audiences engaged and participating interactively through SMS-es, customized birthday greetings and Flickr photosets with one another. Live streaming of the games in ten locations across the island was also broadcasted to audiences along with daily video highlights of the Cultural and Educational Programs.

Located amidst lush greenery of the NTU campus, the YOV provided athletes and officials a comfortable temporary residence for 18 days. A safe and conducive place for the athletes to rest and prepare for competition, the YOV also buzzed with live as an avenue for social activities, specially designed cultural and educational programs that offered youth from over 205 National Olympic Committees a taste of exciting and diversified experience. 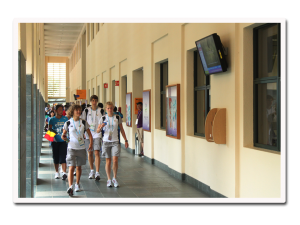 The integration of Scala’s powerful software platform combined with customized applications made it possible for the NTU team to meet the demand for varied content to be scheduled and broadcasted to different locations within the village.

The magnitude of the event required a competent deployment to drive content updates smoothly and efficiently. One of the biggest challenges faced by the team arose from the extensive volume of content in various categories received at short notices that had to be produced and broadcasted within a tight time frame.

To overcome  this challenge, the team labored on creating a set of pre-designed templates and making the best use of templates for the daily 6.00AM to 12.00AM content distribution. The Content Manager easily handled the effective distribution of schedules for daily playlists for each network loop to different signage locations.

Click Grafix provided further support to the team by assisting them to strategize content management in the best practices for playlist creation and scheduling. In addition to that, a customized software application was also developed to help the team keep track of content playback at all the locations whereby the application made it possible to monitor in real-time what was being played on every screen. 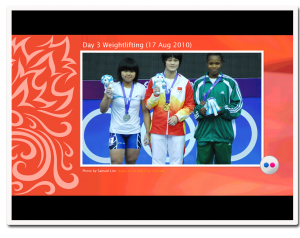 The successful daily operations of the network was made possible with a combination of Scala’s robust technology matched with the skills and enthusiasm of a dynamic team of volunteers from NTU. Headed by a Digital Media Manager, Assistant Manager and four Assistants, the team’s detailed organized planning and execution of great ideation bundled with positive attitudes and fine camaraderie within the team members were critical success factors to the whole implementation of the signage network.

NTU are happy with the implementation that has added to the whole experience of the Games as participants savored the interactive and responsive viewing experience provided through the signage.

This entry was posted on Monday, December 6th, 2010 at 07:49 @367 and is filed under DailyDOOH Update. You can follow any responses to this entry through the RSS 2.0 feed. You can leave a response, or trackback from your own site.