You don’t need to imagine any longer – “senior executives from the leading companies involved in the Digital Signage, Digital Out of Home and Mobile sectors, invited to convene a very special panel to discuss the industry” as our RapidTV Digital Signage Round Table took place Wednesday. 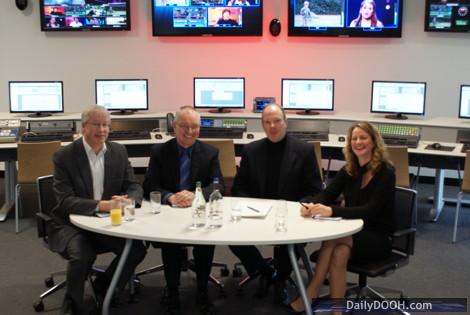 The panel was filmed December 8th in a pop-up studio in the UK at the offices of Harris Broadcasting.

Many thanks for those who braved the weather to be a part of our studio audience, especially those who went on camera in our very own version of ‘Question Time‘ – James Abdool, Howard Smith, Geny Caloisi, Chris Fitzsimmons and many others who all asked intelligent and thought provoking questions.

Next round table is likely to be live at #ScreenMediaExpo in London in May.

This entry was posted on Wednesday, December 8th, 2010 at 17:02 @751 and is filed under DailyDOOH Update. You can follow any responses to this entry through the RSS 2.0 feed. You can leave a response, or trackback from your own site.

2 Responses to “Digital Signage Round Table”