PEARL MEDIA, a leader in non-traditional, Out-of-Home Media with an emphasis on StreetLevel outdoor advertising, has once again partnered with Verizon Wireless, this time bringing an interactive, virtual snowball fight to the streets and premier malls in major markets throughout the country. 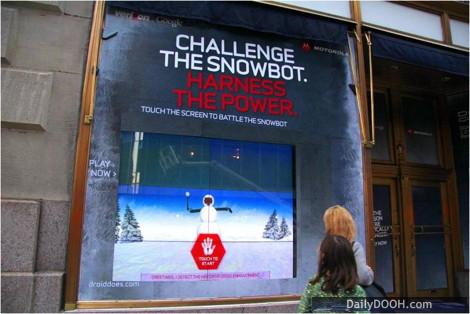 This one-of-a-kind experience allows consumers to learn all that DROID DOES via a fun and holiday spirited, interactive game featuring the famous Verizon Wireless Droid Snowbot. 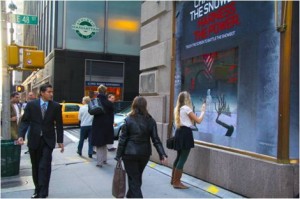 Using various forms of gesture, touch and social media interactivity, Pearl Media, along with its strategic partner EyeClick Ltd. challenged consumers to block rapid firing snowballs from the Droid Snowbot. As time counts down, snowballs featuring different
elements of the Droid phone are mixed into the game with regular snowballs.

When the game is complete, consumers are able to enter in their email addresses and share their experience with thousands of friends by posting their results on Facebook.

“Being able to tie our interactive experiences with various social media outlets has added an entire new dimension to all of our programs. While the impact on the street level is tremendous, the social media aspect allows our clients to connect their brand messaging with thousands of additional consumers. Pearl Media has been on the forefront of incorporating Social Media layers into all of our programs which results in longer consumer dwell time on the street, greater traffic to interactive locations, and a viral overlay that has been non-existent in traditional OOH media.” says Pearl Media President, Joshua Cohen.

The Pearl Media Verizon Wireless Droid Snowbot displays have been throwing snowballs at consumers in six (6) major markets (New York, Los Angeles, Atlanta, Seattle, San Francisco and San Diego) since Thanksgiving and will be on exhibit throughout the Holiday Season.

The interactive locations are a mix of vacant Storefronts both on the street and in major malls throughout the country. Pearl Media teamed up with Zenithmedia on the planning and execution of this program, while the game’s creative elements were designed by McGarry Bowen NY.

This entry was posted on Friday, December 10th, 2010 at 13:58 @624 and is filed under Scuttlebut. You can follow any responses to this entry through the RSS 2.0 feed. You can leave a response, or trackback from your own site.

One Response to “Pearl Media Battle’s The Snowbot”